The background image on this blog is a 2 mile stretch of Interstate 70 at mile marker 168 in the middle of somewhere Missouri.

This scenic view is the setting for an often told story by my mother. As she tells it, we were on the return leg of a trip and I was just old enough to sit in the passenger seat and barely see over the dash. I reckon I was about 9 years old.

As we crest the hill from the east, I said, "Mother! Mother! Look! There's the future!"
Amused, she didn't think much of it. 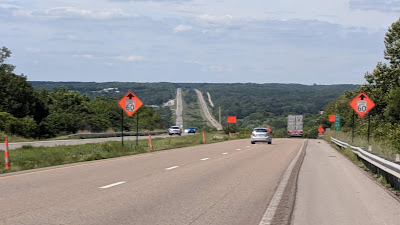 As we neared the top of the western ridge, "We're here! We're here!" I exclaimed.
"Where?" asked Mom, startled at our apparent arrival.

It's usually not a startling surprise to me because I saw it coming. I'm not clairvoyant or anything like that, I'm just visionary and it started when I was young.

Sometimes I see a future in a business opportunity. Sometimes I envision a goal I wish to attain. Sometimes it's a life event that, apparently random, plays out exactly how I wrote it to be. The frequent fruition is me exclaiming, "We're here!"

Don't be over impressed. There's no secret. I have no magic glasses or crystal balls.

What discovered is that I could dream about how I wanted the future to be, talk about it, then live expecting it to be that way. The only literal thing I can point to is the words I use. There's nothing mystical about that.

It's not magic, it's visioneering.